Seven years since the big truck went by…

Certain dates of infamy should never be forgotten. Here are just a few that come quickly to mind for most of us:

The sad list goes on and on. In our myopic American view of history, these dates—and I would add November 8, 2016 to the list—are the ones that we recall as most tragic because they affected us so directly. While indeed infamous in their own ways, the world has seen so many more and worse.

December 2, 1984 – Bhopal. Who even remembers this? Again, thousands die needlessly because of human negligence.

Seven years ago today, my heart was broken when an earthquake struck a land that is near and dear to me. Haiti. Many thousands died and millions more lost their homes in an instant. Some might say that this date is different than the aforementioned ones because an earthquake, unlike an atomic bomb, an assassin’s bullet, or an ignorant electorate, is an “act of God” rather than a human activity.

Well, yes and no.

An earthquake is a natural phenomenon, it’s true. But the poverty that was the root cause of most of the destruction and death is not. It is man-made. Often, as in the case of Haiti and other developing nations, it’s the poverty inflicted by malicious outside forces. Earthquakes strike all over the world on a semi-regular basis. Granted, few are as strong as the 7.0 tremblor that rocked Haiti on January 12, 2010, but worse quakes have caused significantly less mayhem. The poor always bear the brunt of the suffering.

And it will be the same next time. Unless.

It’s been rightly said, though not nearly often enough based on recent events, that those who forget history are condemned to repeat it. We are living proof. This kind of thing will happen again and again and the poor and oppressed will always be the prime victims. Are we comfortable watching all this suffering from our opulent homes and waiting for the next catastrophic event? I’m not.

Remember with me, not just in our minds or even our hearts but through our actions, Haiti and all who suffer needlessly. 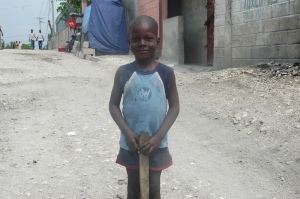 [If you’re looking for a way to help, look no further than Partners in Health. They do tremendous work in Haiti and other countries where quality medical care is either scarce or nonexistent.]

It's not about me, remember?
View all posts by rickconti →
This entry was posted in Haiti and tagged bhopal, earthquake, genocide, haiti, hiroshima, history, holocaust, oppressed, poverty, rwanda, suffering. Bookmark the permalink.

1 Response to Seven years since the big truck went by…